Wetroom with shower and toilet in our Camper Van

If you need a „bathroom“ in a Camper or not is individually up to the builder of the Van. We want to add a shower & toilet so we build a wetroom in our Overland-Campervan!

Never have we talked, heard or read so much about number one’s and two’s or where to pee and poo than while planning the Van layout.

Wether you want to use the Van vor short trips or long term travel, there are lots of possibilities to use the restroom without a permanently installed „bath“ in the van:

There are also various options to shower on the road:

One of the reasons why we chose a cargovan for our build is the possibility to add a wetroom; one of the main reasons for a wetroom is privacy and with a separate room there’s less noises and smells. At night, you don’t have to wake the other one when you have to go outside. In case of an „emergency“ like the stomach flu, you have your own toilet available. To take a quick hot shower in winter. To hang wet clothes to dry (when you’re driving or on the move or when there’s no possibility to hang clothes outside or when it’s too wet or cold).

This is how we build our wetroom (or „bathroom“) in the Sprinter:

The base is a custom made shower tray made of stainless steel. 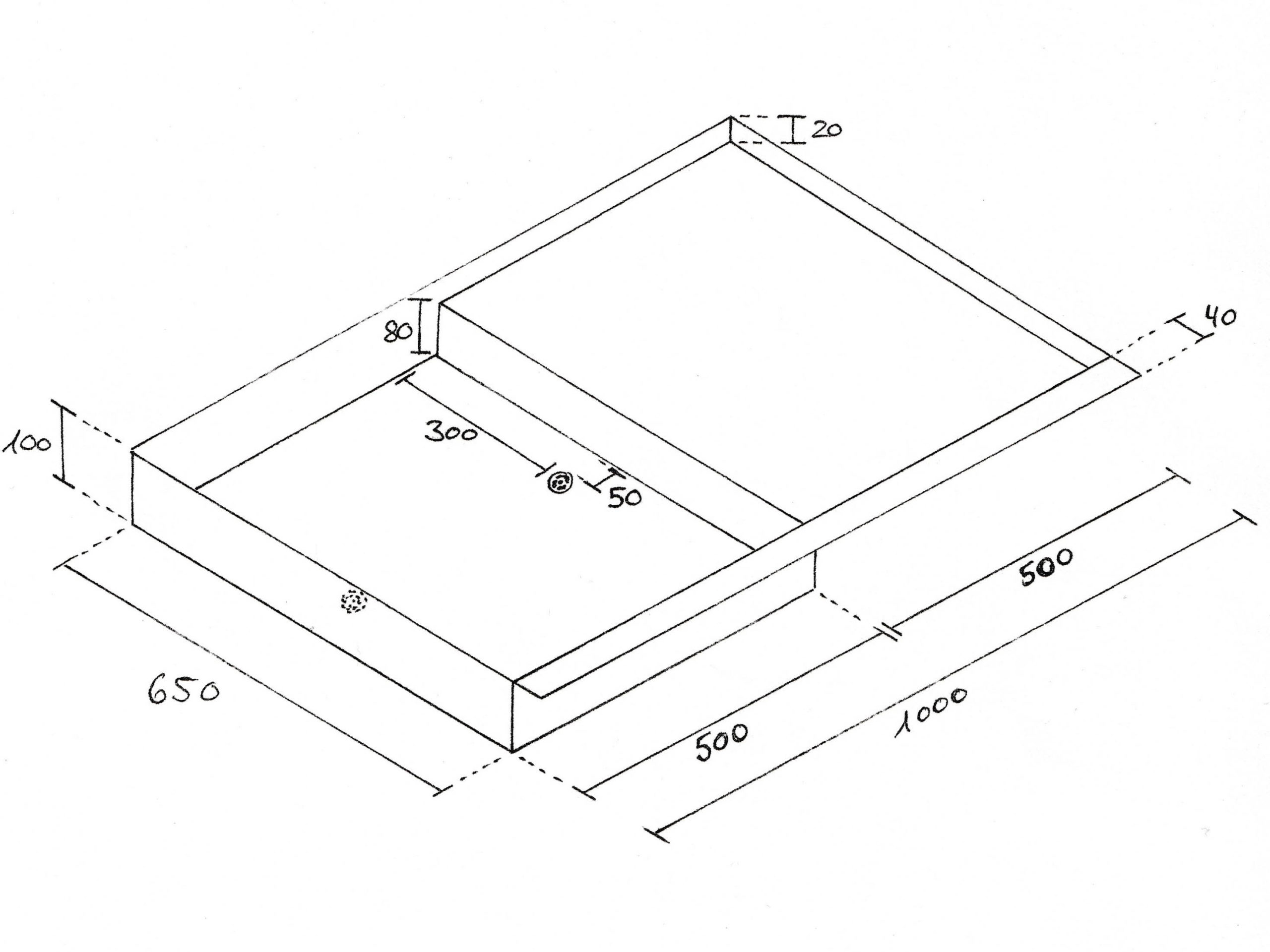 The back panel is made of 4 mm poplar plywood. The cutouts are for the window, the toilet or rather the Service Door, and the shower tray.

The side walls are made of 15 mm Banova plywood with HPL-coating, we made templates of poplar plywood before transferring them on the Banova wood. The left wall of the wetroom is at the same time the right wall of the tall cabinet. 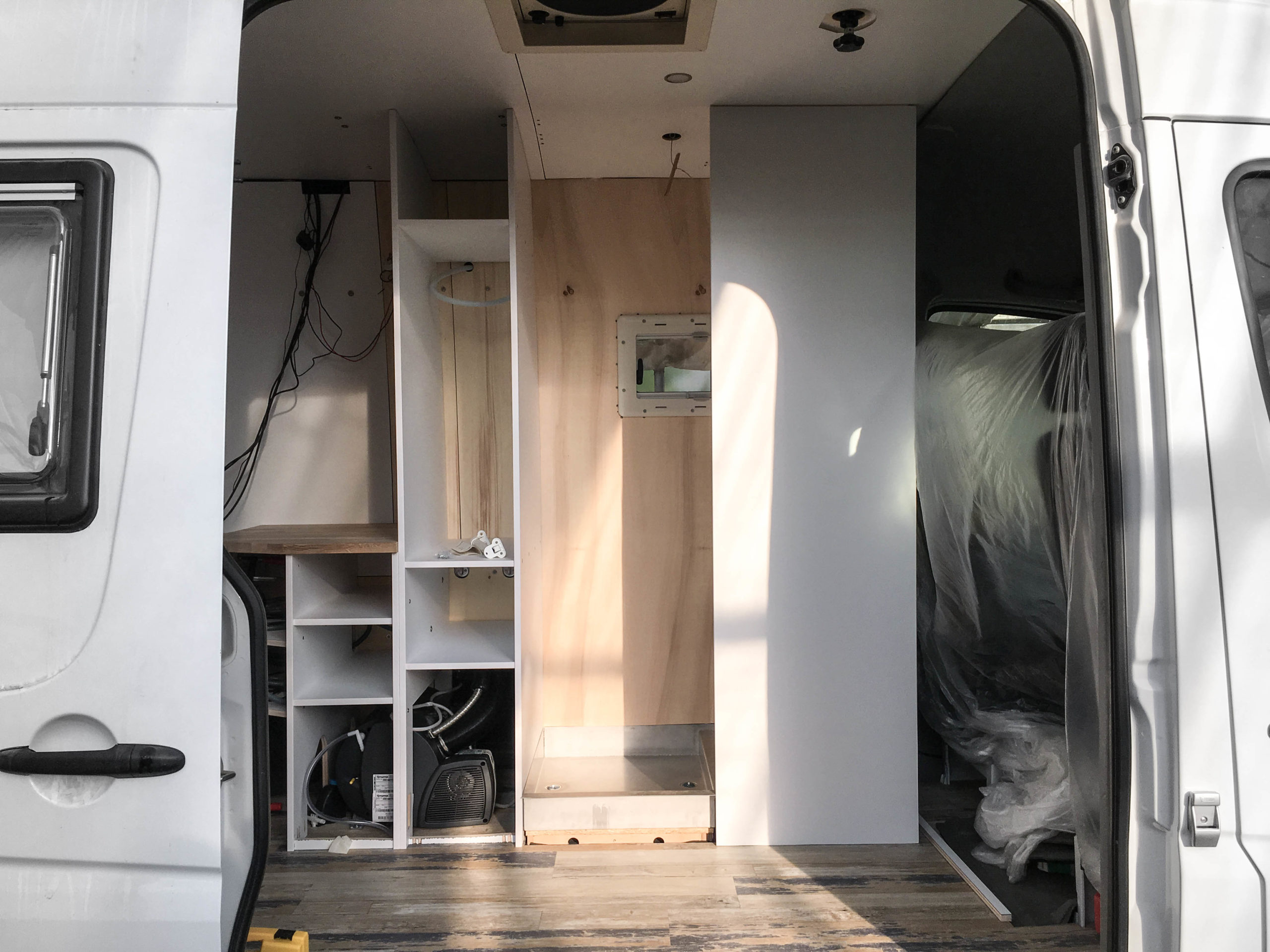 To waterproof the wetroom we used 2mm Rigid PVC. It’s delivered rolled up and with a protective layer of removable foil. You can draw the measures on with a pen and then cut the plastic-parts with a jigsaw. 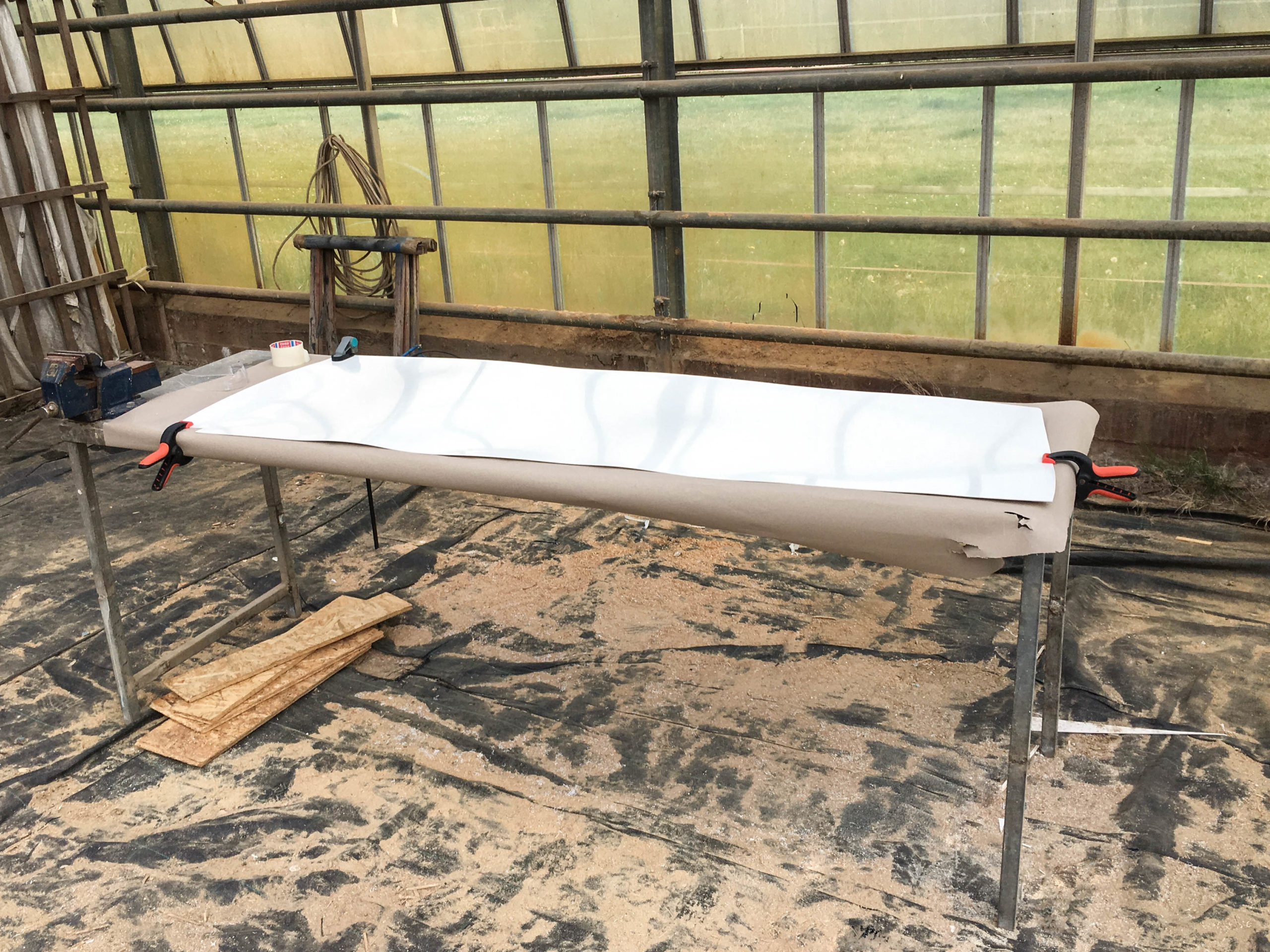 Before we glued the fitted and tailored parts of Rigid PVC to the walls and ceiling of the bath with Sikaflex 252i we applied activator and primer for better support with a brush. 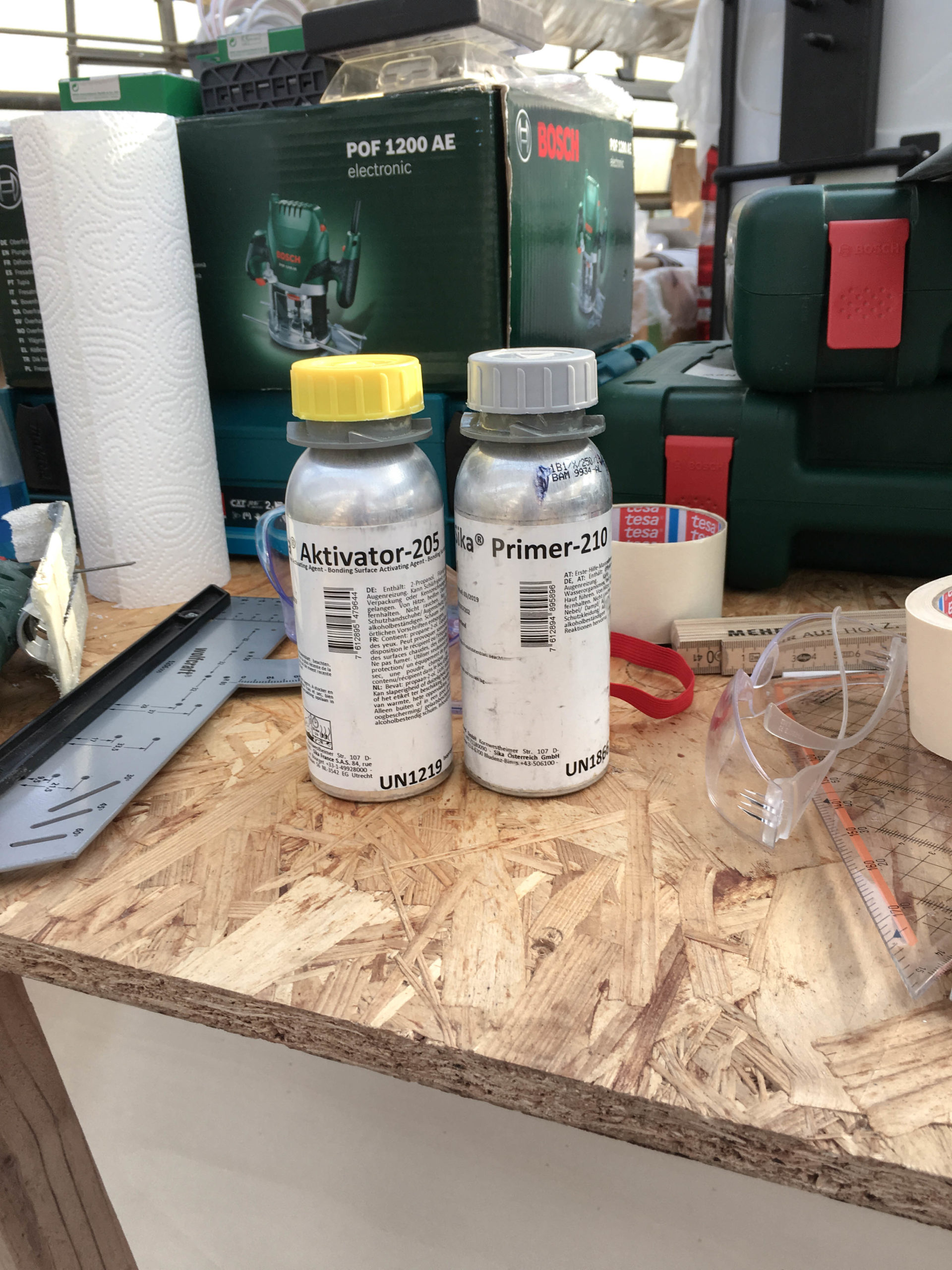 As we did not want the PVC to slip while it was drying, we stuck some wooden slats in between the walls and additionally fixated it with clips and screw clamps. Be careful though, because when you tighten the screw clamps too tight, the plastic can break! 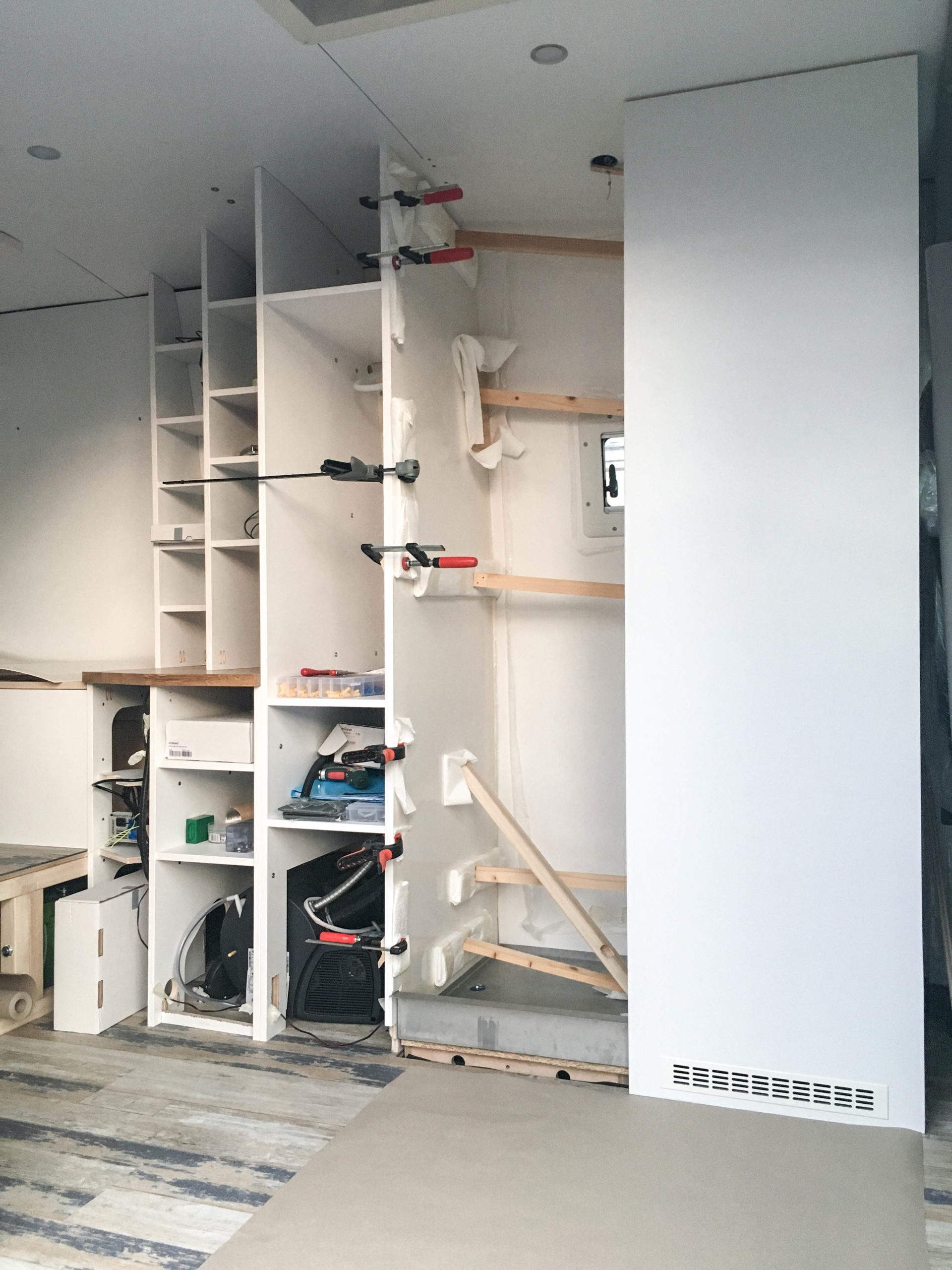 Then we just had to easily remove the protective foil. At last, we grouted the edges with temperature resistant silicone to really waterproof everything 😉 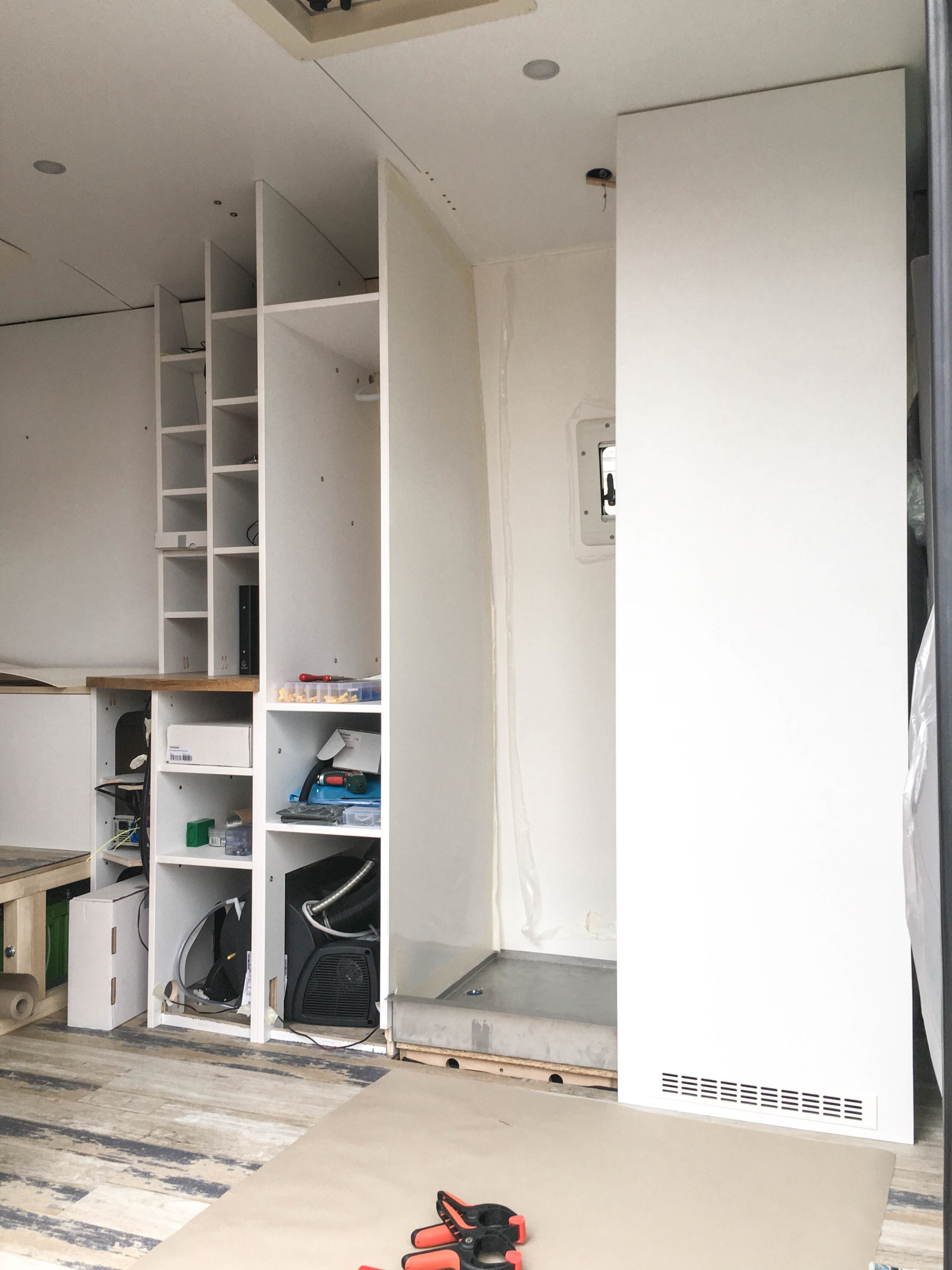 The next step was to install the Cassette Toilet on the raised shower tray. Just follow the  provided instructions. The toilet is installed with 4 screws in the ground and a support piece on the wall. Additionally we grouted it with silicone. 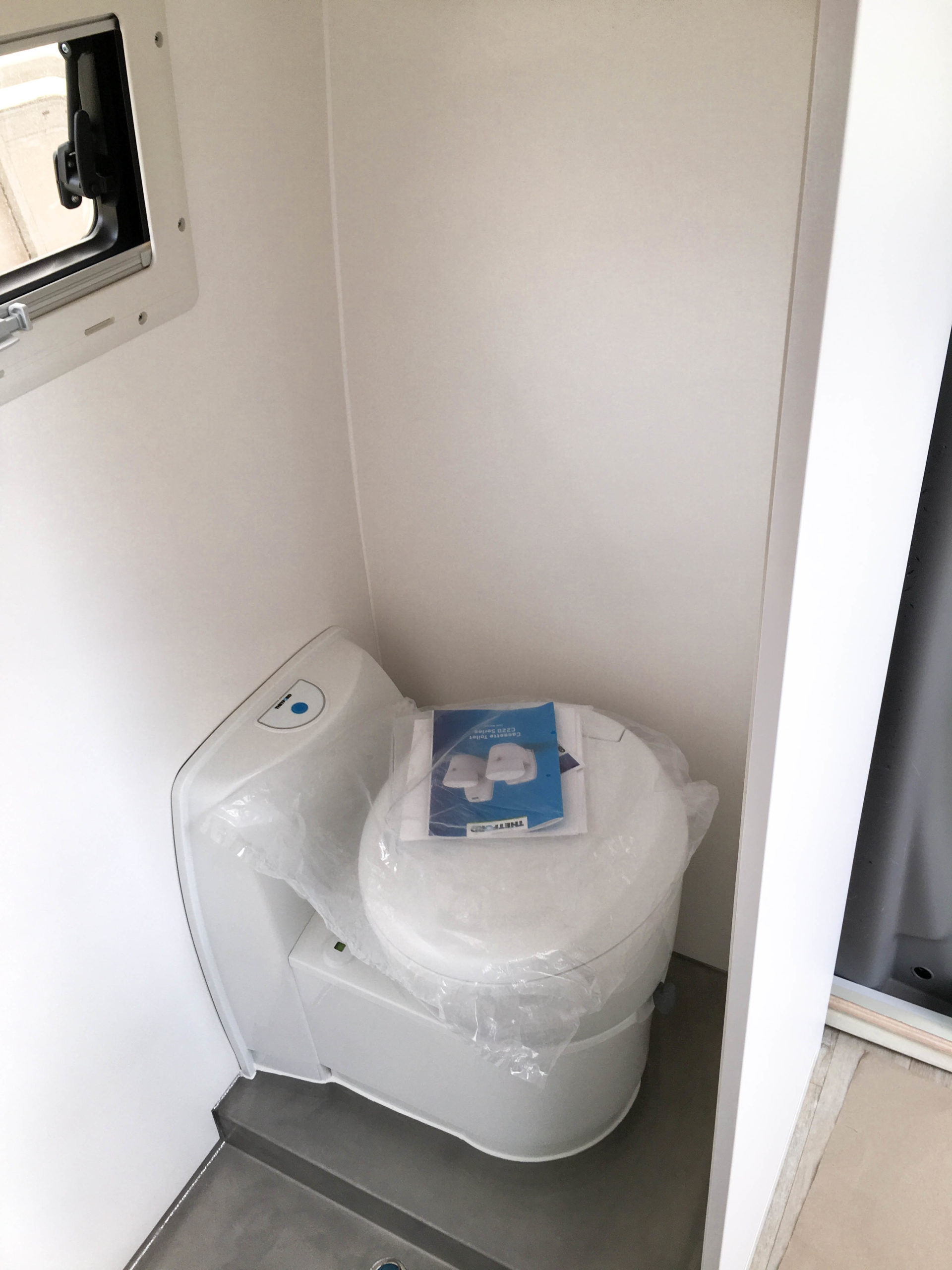 The washbasin is made of HPL-coated Banova plywood, a plate made of teakwood and a pull-out faucet. This way you can shower inside as well as outside by just pulling the faucet outside (through the window) and fasten it to the lashing tracks on the side of the vehicle. 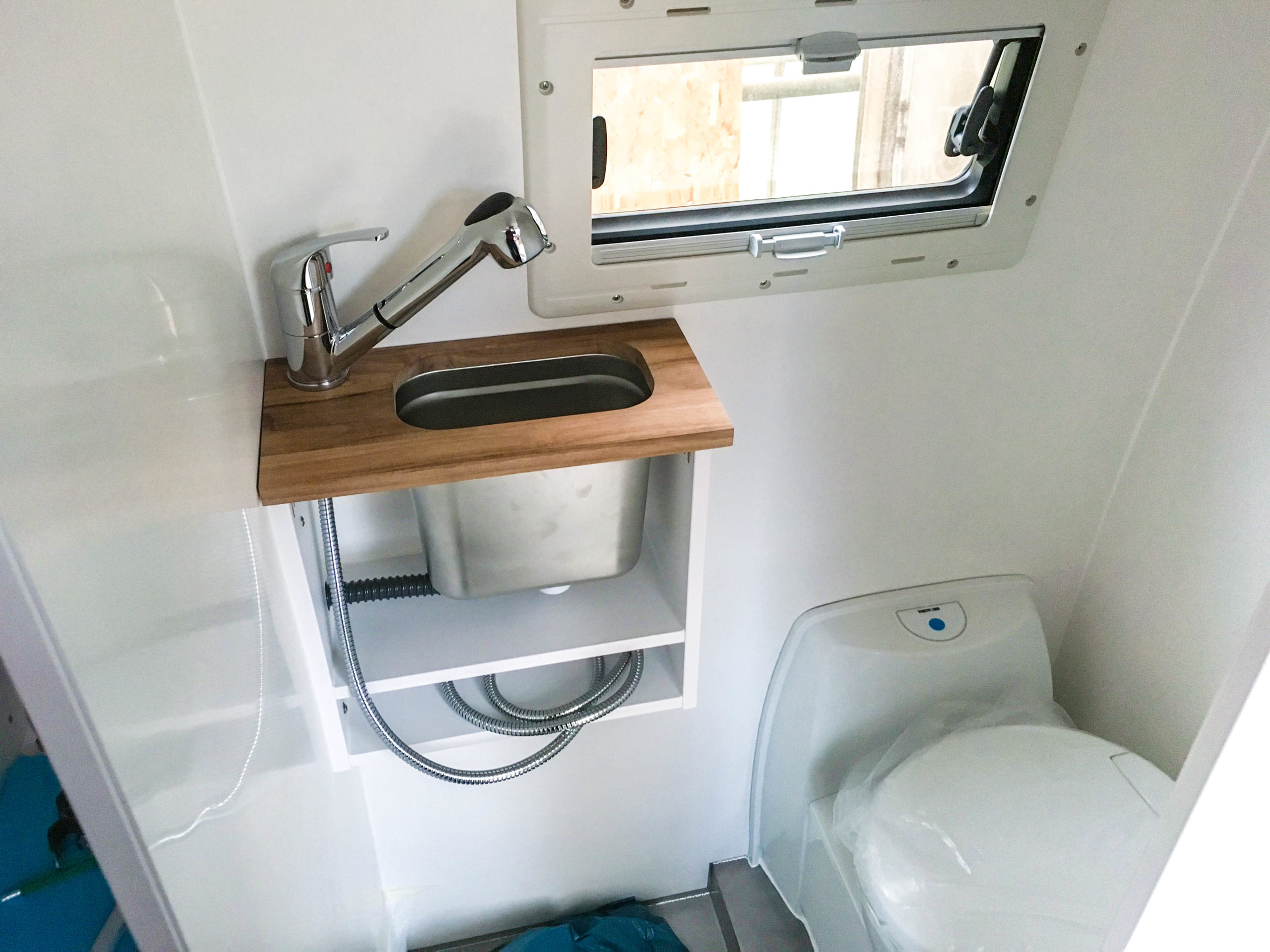 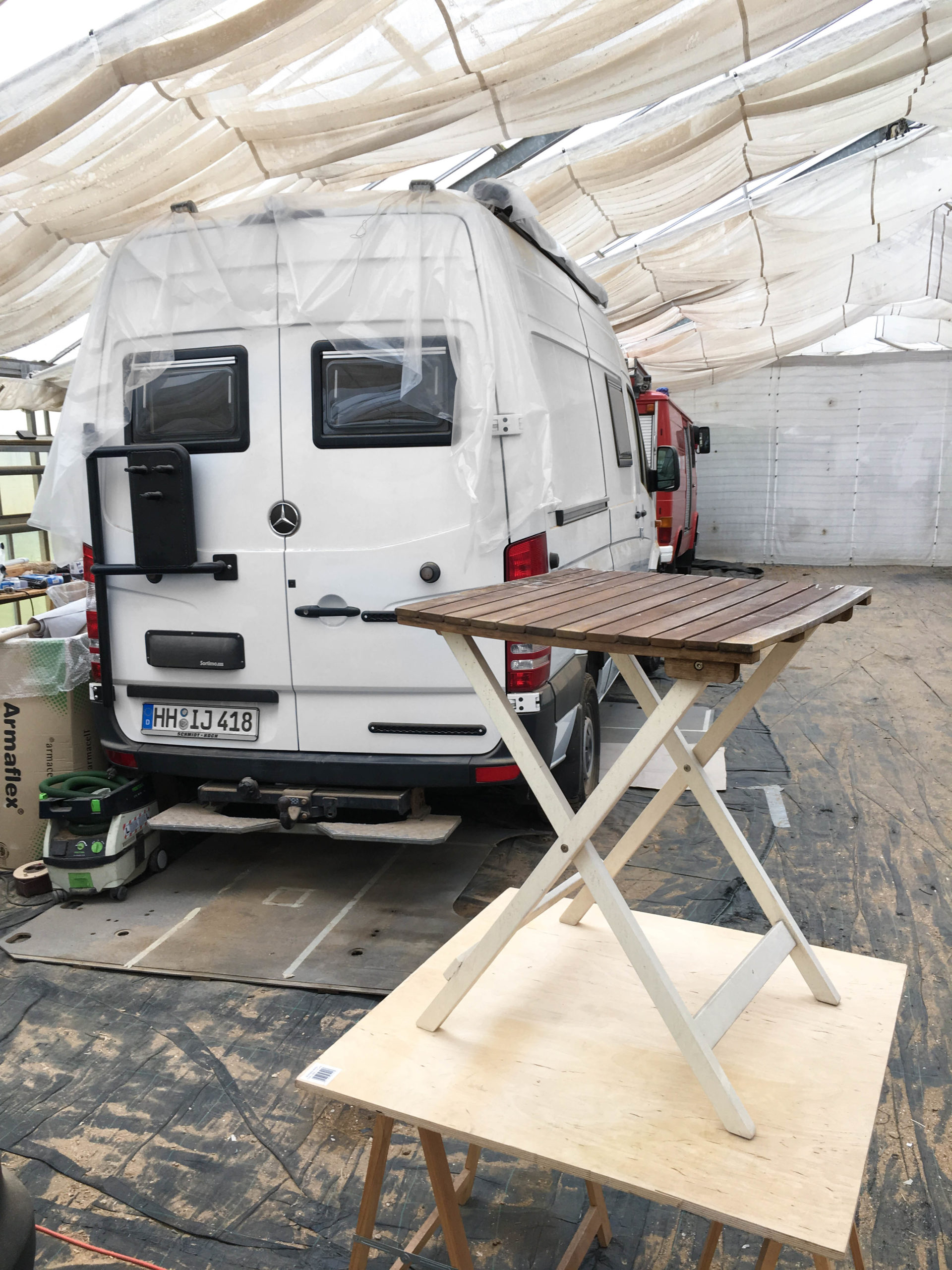 We sanded down the teakwood, cut it to size and then reassembled it for the shower tray as a shower grid. 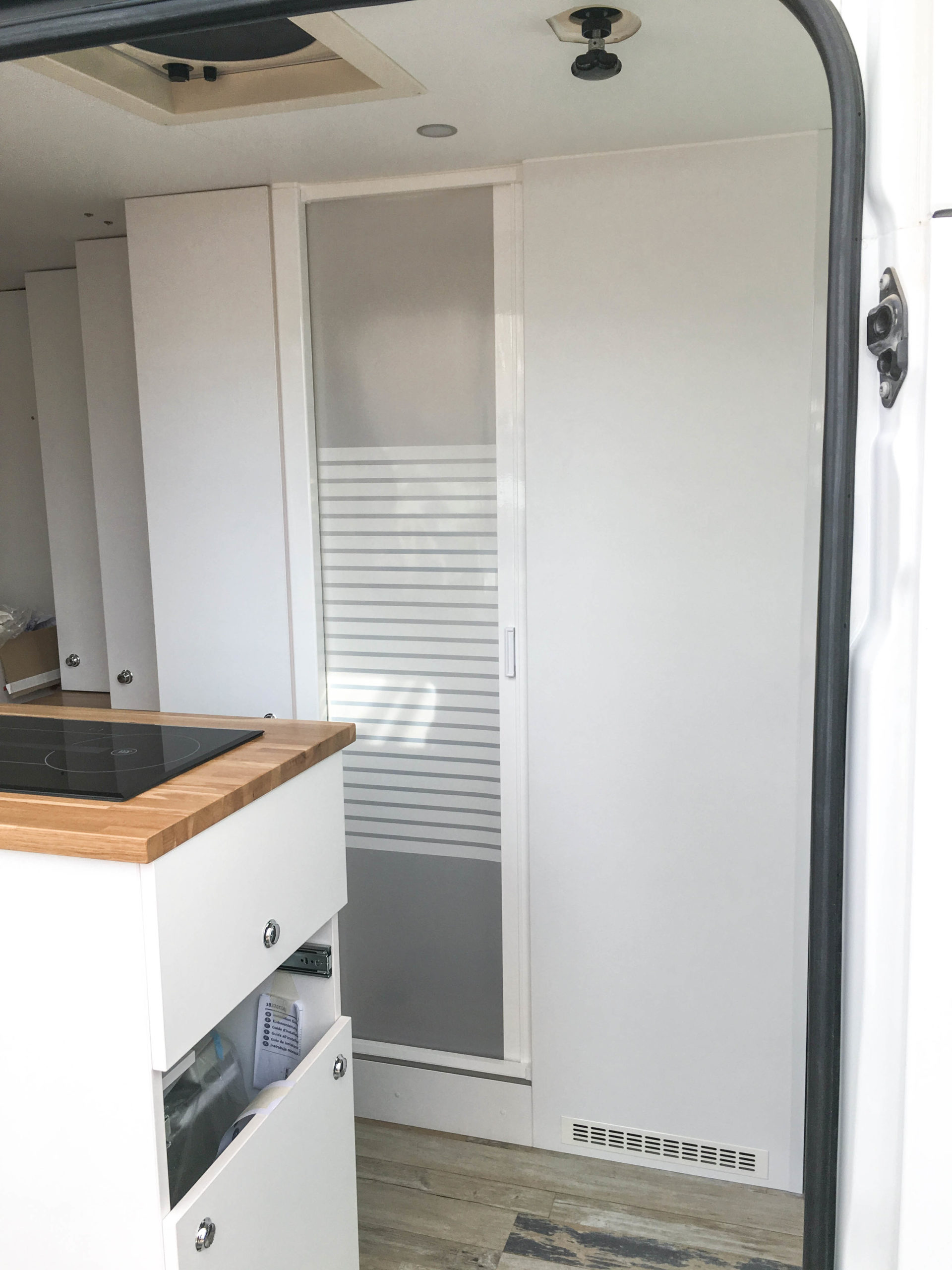 Last but not least – a mirror made of acrylic glass. 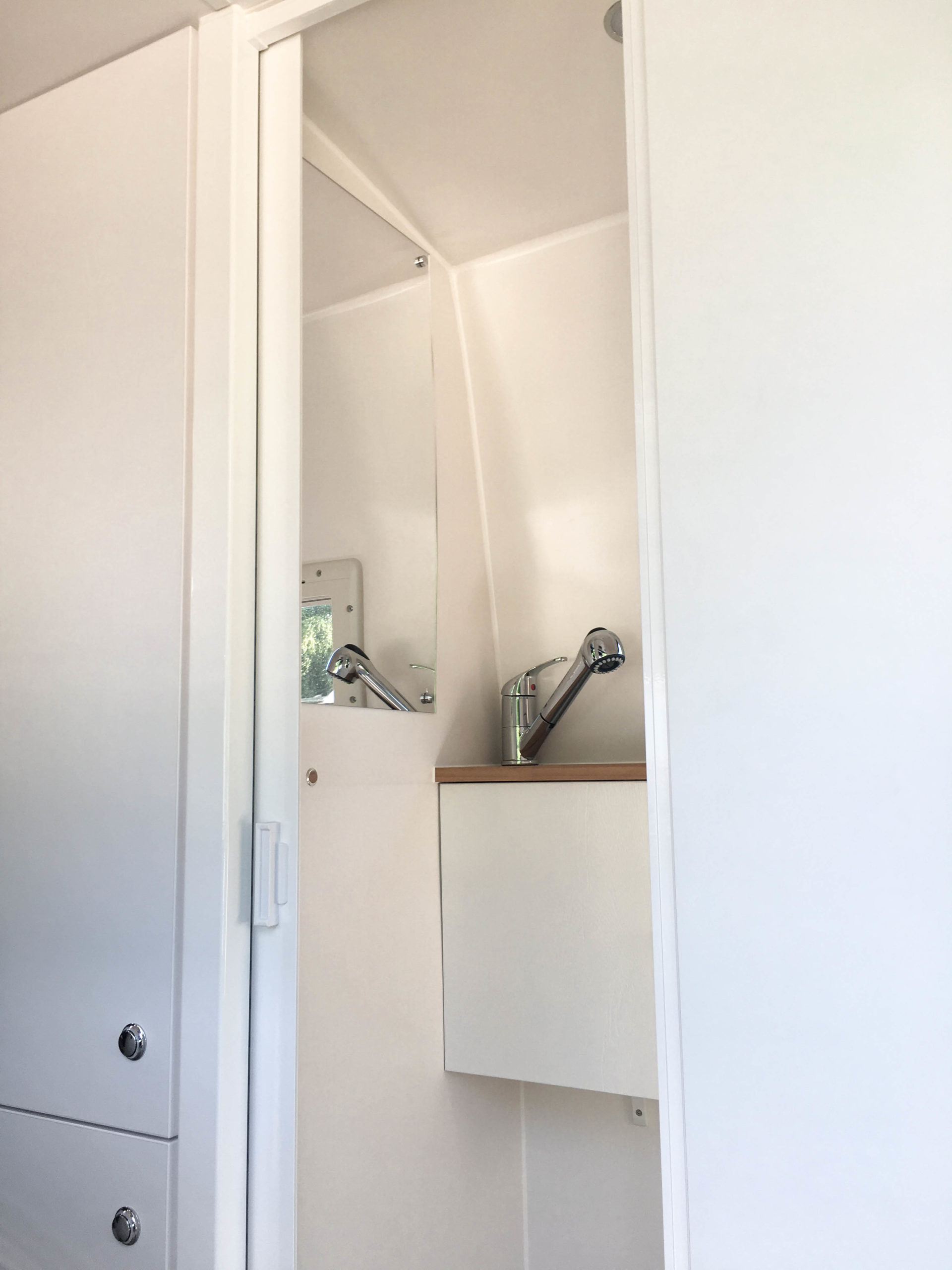 So this is what it looks like, our small but fine wet room in the Overland-Campervan! 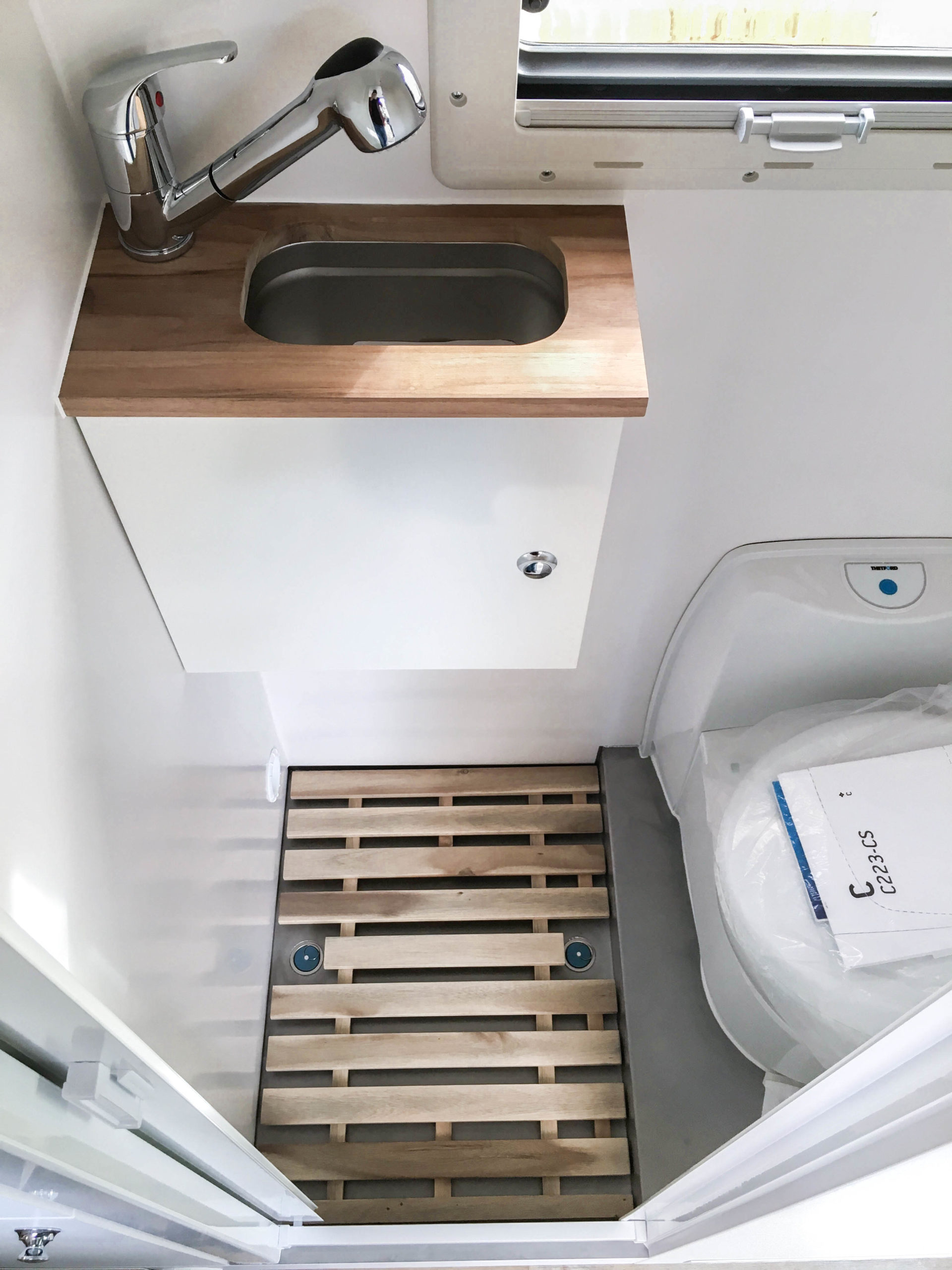 If and if so which kind of toilet you choose is up to you! Here we have more infos as well as pros & cons for the different kinds of toilets for camping and campervaning!

This is how we waterproofed our bathroom: